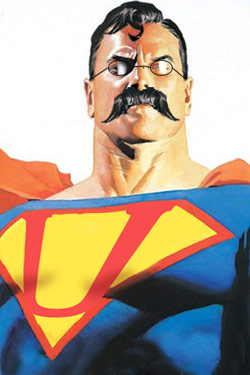 You Have the Moral High-Ground

“But what can I do to help?” This has long been the battle cry of the the moral crusader, the social justice warrior, or what Anton LaVey liked to refer to as the seeker of “The Good-Guy Badge.” It has long been accepted that altruism and self-sacrifice represent the moral high ground. To this the Lords of the Left Hand Path came forth to say “no more!” For here is the truth – you can’t help. At least not until you have helped yourself.

So often the altruistic battle cry of only wanting to help belies in fact a desire to control, to enforce groupthink and to get that Good-Guy Badge. This is why so-called social justice warriors seem to ooze with hubris. To know thyself and to embrace thyself means to also to embrace humility and respect. To build the self is like building a strong foundation for a house, it takes time, focus and attention. The altruist or the SJW has skipped this stage, going right for the endgame of pointing the finger and taking credit for caring more than you…for sacrificing more than you…for being more sensitive than you. There game is to single you out and alienate you. But if you are strong in your sense of self, responsibility and conscience, their slings and arrow will bounce off you. Do not become entranced by their glamour, for their house is built on an empty foundation and destined to crumble.

I say the glamour must be lifted, revealing the face of the serpent! Let the Altruists and Collectivists have their Good Guy Badges stripped from them and tossed into the fire! Look upon them for what they are – immoral parasites – who in the end only want to bleed you of your essence, syphon your energy, and rob you of your own hard-earned property! Be deaf to their jeers, and toss them aside, upholding the strength of your own conviction to rational self-interest and personal responsibility! Let the strength of the fire that burns within you – the Supersubstantial source of Consciousness and Conscience – be a comfort to you as it is to others who can see the glimmer of it’s light.

When you fully embrace the personal responsibility that goes along with the Morality of the Left-Hand Path, you realize that embracing that morality really is the best thing you can do for society, even humanity. As you assert your own individuality and self-deification, the Black Flame expands and just maybe that helps make the world a better place. That is the highest sense of duty; to embrace that innermost fire of self – without regret, shame or hesitation. It is the duty that everyone must arise to and uphold within themselves. The path of temptation is the easy way of blaming all your failures on others. It’s easy to find a convenient individual or social group to blame all your problems on – perhaps a mythologized ethnic group, or maybe an economic group – or maybe the thought that anyone who is successful must have cheated to get there. The much harder way is to take responsibility for yourself, and work to achieve your goals or to create new opportunities for yourself. Indeed the path of temptation is exactly the opposite of what the Priest and Ministers of Altruism have taught us over the years.

The philosopher Aristotle was fond of using ‘classes’ to understand reality. Remember that as a member of the class of all humans, by increasing your own consciousness and strengthening your own state of being through the process of Xeper, you are literally helping to increase the overall all state of being of the class of all humans. Again, the best thing you can do for humanity as a whole is to embrace the Left-Hand Path morality of Self-Deification, Individuality, Self-Evolution and Will. In enhancing your own potential for self-consciousness, you are in fact literally increasing the overall incidence of self-consciousness in all of the vast Universe. This is why we like to call it the Great Work, for it’s implications are cosmic.

So remember when the minions of the Right-Hand Path try to waggle their finger at you, it is you who have the moral high-ground, for you embrace one of the only systems that allows for the freedom of all individuals. All of the Right-Hand Path systems that emerge from Central Authority are based on inhibiting the freedom of someone, or some group; of parasitically syphoning their their energy via religion, or even of outright robbing them of their property through progressive Statist taxation. Over time the group to be enslaved may change – At one time it was competing tribes, alternative religious groups, or perhaps people of a certain race. In more recent times the focus has switched to academic or economic class as a basis for inhibiting freedom.

The Left-Hand Path magician should be able to easily and confidently point out the essential immorality of any system that is based on inhibiting freedom and facilitating coercion. For freedom is the essence of the Black Flame, that sacred and Supersubstantial Fire that burns eternal with the Highest of Life. Remember that if all you can say of morality is that “it’s all relative,” or “morality is uncool,” then the Altruists and Collectivists will always be able to claim the moral high ground. But if you can talk about the Morality of Rational Self-Interest and Personal Responsibility as being the true and original morality you might be able to stand your ground, and just maybe we can start taking some of that high ground back.

None of this should be misconstrued as a desire to create a ‘Left-Hand Path State,’ and certainly no one need be forced into following the ideas of the LHP. But I do think everyone is a unique individual being, only most have forgotten, fallen asleep, or been coerced or cheated out of this deep metaphysical truth.

Some have suggested that RHP/Central Authority is needed because most people need to be told what to think or do because they are just too incompetent to manage their own lives. To this we must respond that even if it were so it would not have the right to come in and manage it for them, just as we wouldn’t respect someone else’s right to come in and start managing our affairs uninvited. The LHP is not about organizing a model society and forcing it on everyone for their own good – that’s actually the aim of the RHP. You could argue that you can quantify more overall good by just telling everyone what to do (utilitarianism, etc), and that may be fine by some estimates, but it’s not LHP. The essence of the LHP is claiming personal freedom as your own natural right, and acknowledging others have that right as well. You can’t maintain that value and still go about organizing everyone and putting them in their proper place.

The Daimons of the Diabolicon went through precisely this same question in regard to whether they should control the Black Flame so that no one hurts themselves with it, in the Statement of Belial

Many there were among us who felt anger at this ruthless mutilation of our Gift, and Beelzebub brought to question whether we also should not descend among man and contest this usurpation of his Will. But I said, Were we to lead man in this venture, we ourselves would declare his failure, and he would believe our Gift to be weak indeed. Messiah must see that free Will is beyond the concern of God, and that man will finally win his own destiny apart from all dictated schemes.

They concluded that to control and coerce would be an immoral misuse and denigration of the sacred Flame and that were they to do so they would be no better than Masleh.

The suggestion that Central Authority is actually protecting us from some greater evil or an ‘apocalyptic storm’ can be dispensed with peremptorily – this is precisely what Yaweh told Adam and Eve in the Garden – don’t eat the fruit from the tree of knowledge! Like Adam an Eve in the Garden, The RHP/Centralized Authoritarianism is precisely what has kept us in a general state of warfare over the centuries, and a state of total war during the last century. If anything the RHP is leading us in the direction of an apocalyptic storm. We can’t make a better mousetrap, when the mousetrap is based on robbing people and putting them in cages. Therefore we do not talk about creating a new ‘LHP State’ rather we talk about self-creation, promoting individuality, and opening a way for freedom for all

Remember that you as a rational self-interested and responsible being of conscience you are the greatest hope for the future of the human race. The majority seeks to pull all down to average and redesign humanity as a cannibalistic hive where the weak live off the strong until the strong lose their will to succeed, and the overall energy level is a bare subsistence. At that point man can only have lost all sense of conscience, all sense of true and deep emotional connection to his tribe. At that point humanity disintegrates and de-evolves into something it was never meant to be. By embracing the Morality of the Left-Hand Path we have a chance to save humanity, to promote individuality and to keep the Black Flame alive and burning.