I don’t always place that much stock in dreams but this one was really vivid and seemed really relevant to things that had been going on in waking life. I’d been studying a lot on Zoroastrianism as well, reading The Good Religion by Darban-I-Den, listening to various recordings of Gathas and Gahs, and so forth.

In the dream, I was in a dark room. It was kind of like a Victorian era workshop – the kind of place Bob Cratchet and Ebeneezer Scrooge would work –  with lots of wood tones, and no electricity, only candle-light. Or maybe oil-lamps? There were definitely fire-sources around. There was a window nearby and you could see it was pitch black outside. There were a number of workbenches with people standing around working on them, but all in shadows, couldn’t make out any faces or voices. They/we weren’t slaves or anything – no one was changed to their workbench, and there was nothing at all foreboding about any of the situation.

I had my job at my workbench. I would take a chunk of clay – actually it was more like that bright florescent pink Play-Doh I’m sure everyone remembers from childhood. I’d roll a piece in my hands until it was the size and shape of a short cigar. Then I’d roll a separate piece into a little ball maybe an inch diameter and punch it with two eyes and a little smiley face, and pop it on top of the cigar-shaped piece which was obviously it’s body.

Then I’d hand the little fellow on to the guy at the workbench next to me. He made the wings. I couldn’t see his face, but I could see the wings as he was molding them, and they were kind of – but not quite – butterfly shaped. It was hard to tell, they seemed to keep moving and undulating. He’d stick them on the body, then the little figure would get passed on to another bench but then that was out of my sight.

There was music and chanting going on, which sounded something like this Havan Gah Prayer – Khorde Avesta only it was a whole choir singing in unison.

Then there was this voice, and it said, “These are the souls that will go to Earth.”

So then I woke up and I still totally had the music going in my head.

It was so intense and vivid that I thought about it all day at work. I was working on the road in Beaufort SC. After work I had to stop at Wallgreens to get some toiletries and while I was there I was still thinking about the dream, mulling over the imagery and sounds in my head. I wondered if they might have Play-Doh there, so I stopped by the toy section and sure enough, they had a little jar of the florescent pink stuff. So then I had to check to see if they had a white candle which they did.

Back at the hotel, a number of things happened but I will skip the minutiae and let you know that I was able to recreate the figure to look exactly as it had in my dream. 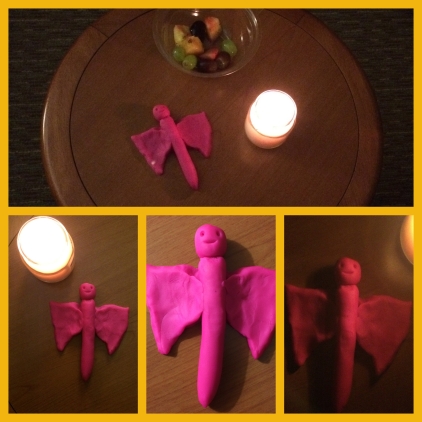 I wonder here he will fly too, since he’s already on Earth?